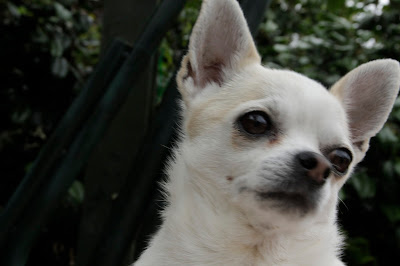 my baby 'Ana Chi' eight years old, a dumpling with 'attitude' (she bites, but only those who will attack her mum)! 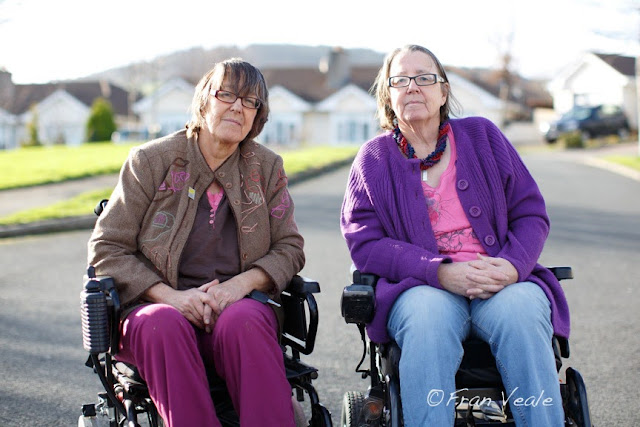 Ann and Margaret Kennedy, Identical twins with Mitochondrial disease
i want you to meet my dear twin sister Margaret on the right of this image....our campaign for 'forever wheelchairs' has begun....no more can we cope with the bangers from the HSE which lose 'bits' on far too frequent a basis, including wheels flying.'
Ah its another day in my lovely country.

i have bags packed and my twins wheelchair is being powered up in the hall.

but the 'head went' last night and i have my balance and tinnitus off Richter thing which no one has bothered to investigate.
given that i have so much wrong with me its frightening.
My one reason to hang on is i am to get to Queen's Square London UK under the overseas treatment fund so i am hoping that the stuff going on for me will be investigated there, cos it wont be here.

Mitochondrial disease is a disease of the Mito.  Mito are the tiny part of each cell which produces 'Energy' and it is failing to convert the food we eat to much needed 'energy', without which our bodies begin to slowly die and we have chronic fatigue for not enough to sustain us is being produced for adequate functioning.

It is a very Rare condition and not easy to diagnose, there is NO specialist in Ireland for mitochondrial disorders.

meanwhile no one, absolutely no one has contacted me about the wheelchair from hell.
remember the one that went into a wall opposite St. Vincent's University Hospital?
no, no one, bar an email to give it back and i would be reassessed.
I have been assessed so don't need the re...part.

my bags packed was for Belfast.  the various railway stations were notified, the sterling was bought, the wheels borrowed.
but too unwell.

there is little point telling any of my Irish consultants this.
little point telling my so called primary care team who think i am a alien from outer space and who don't care about me - how do i know, certainly no one was falling over themselves to come see if i was OK after going into a wall.
and the difference is that twin had her OT up next day when the control panel began to fall away.

er, its fixed or was, but now its falling away again.

my wheelchair had a wheel put back on by the lawnmower outfit down a back street in the town.
but the control knob feel away in my hand so its falling apart bit by bit and this is the 'health and safety' regime now of my government department.
they should be strung up. 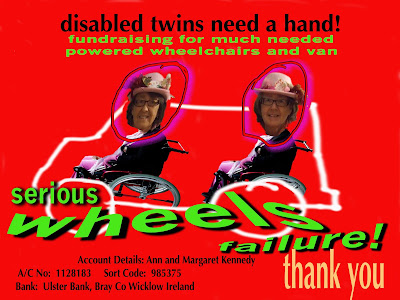 you tend to NEED to put out an appeal like this, for choices are few.  Wheel flew on the 29th July, no HSE official has contacted to repair or replace.

i also have rung the neurologist on a daily basis about it, in despair.
he doesn't answer.
but he doesn't answer for my very good friend with generalised dystonia either.
both have been ringing about stuff, pain wheelchairs pain again and getting out of the country.
both now wish for this and are working on this.

OUT of this country both want to get, failing fast are our hopes for care in this small isle knowing its not there and worse, knowing that the disabled and vulnerable will not or cannot stand up and face the shower of shites in the health service including Dr. Reilly about the way they are being treated.

No i am not an isolated case.
how do i know this.
because i keep in with the disability field both as a patient and as one who knows some professionals working in it.
on the ground the suffering is dreadful.
people are banged up in their sheltered accommodation being forgotten.
people are struggling with equipment which a decade ago would be deemed 'not fit for purpose' not only that, they are not being repaired.

people are constantly being demonised for protesting at all levels and this is the worst and most frightening aspect of the disabled in Ireland.

No one is fighting for us.
No one cares enough to bring the banner out and fight.
the Dail resumes shortly my friends.
my protest will begin in earnest if i am well enough.
Now for my famous 'WHEELS APPEAL"  i had to do this!
many have not liked this on a personal level.
i have further alienated myself from the class of my family who think this is an utter disgrace.
let me say it isn't a disgrace.

what it IS, its a disgrace i do have to do this.
but many are all over the country people have to run the charity field.
there is no where left to turn.
creating two wheelchairs for very sick ladies of 60 is not easy in a health service that cannot provide.
creating a van with a bit of comfort, not luxury by any means but comfort for muscle wasting condition is not something i can do having been ill and disabled most of my adult life.

but i am the banner of the 'independent living' movement, i want to move...not be banged up behind four walls and live out in quiet despair.

i want to 'experience' the move, and the moving.
thus when the legs and muscles begin to fail both twin and i i think up this creative lateral, outside the box Movement Appeal.
and wouldn't you say Wheels moving about is the NAME, of being alive and purposeful.
not shacked up and shackled against one's will. 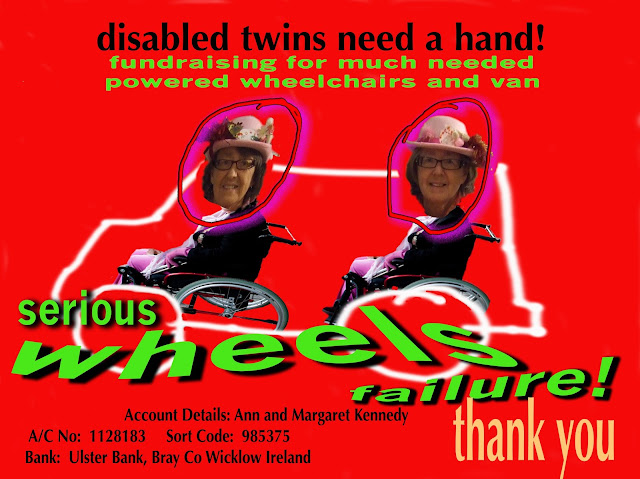 so anyone who reads this please 'pass on', maybe out there the giving of such will not 'hurt' too much, maybe someone has the means, to help even a little.

remember what the wren said.
he was wise, but it could have been a SHE but whatever IT was a wise wee bird.

'every little drop counts, said the wren when he pee'd in the sea!
Posted by Awnyah at 11:00 PM