So true!  Ann and Margaret (that's us) have a progressive neurodegenerative disease, with a complex process occuring which is multisystemic.
this is NOT just a toothache, its has proven to be a heartache, a trauma and a journey i wouldnt wish on anyone really.
it should NOT have happened.
and it SHOULD NOT ever happen again, the abuse , the pain, the distress and the decline in health is testamont that to put any human being through such suffering destroys lives, in more ways than one.

but the journey was of 'wheelchair provision' for identical twins with few supports and very needy.
it began at the beginning of a sojourn in a new county, that of Wicklow, the present residence of the Minister for Health.

its been life changing, and all for the wrong reasons.  FAITH, in humanity has died a death and is buried deep in the rubble, and its rubble believe me its rubble.
Fall out in terms of relationship with the HSE also has taken its toll, and no need to have been so aggressive, and antagonistic.
it was a large organisation pitted against older twins.
but do you win this ever, or is there a very deep cost?
there is a cost of course, to our personal health, our care and the attitude which i guess now have stuck.
but its proven fact the fight has to be gone through, yet shouldnt have to be so tough.
All manner of things were debated and even part payment was suggested.  two years later - we are on the cusp of acquiring fabulous state of the art wheelchairs.
Wheelchairs folks are not Ferrari's.
they are 'legs' and that is what they do, they walk for us.
when we cannot.
they are a prosthesis, and we needed them along time ago /
between then and now the accidents have been at time verging on possible serious injury.
we had tyres ripped, puntured, wheels falling off, control knobs doing the same and whole side panels falling to the road when crossing it.  we had arms swing lose away from the hand and guiding knobs come away in the hand.
we have also had, near misses of going into ravines on side of paths leading to a steep drop.
going into nettles and into mud.
we also had injury for these contraptions of makie uppie wheelchairs cobbled together at a recycling centre of the HSe, a bit like the dumps of india collecting this and that from this and that and making er, a wheelchair.
someone who worked in the third world once said that he was shocked at what he had found in wheelchair provision in ireland - that has to be a mighty wake up call if you ask me.
so the trauma and mostly trauma can be documented in pictures and usually say more than words, as you absorb the reality of duct tape, and mess and damage and problems.
here are the issues, the damage, the problems and a final word the wheelchair.

Finally, if you can't beat em you join em, and you study to learn, to transform and to bring a change about.  Margaret my twin the first of two to graduate from Limerick University on the first programme certificate post graduate course on wheelchair/posture seating assessment.  Devised by Dr. Rosie Gowran, Limerick University. 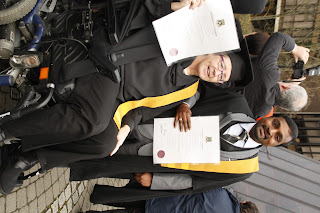 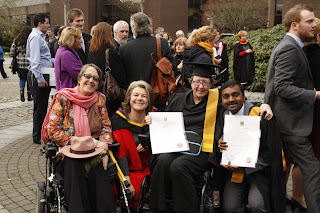 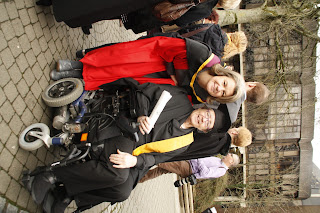 Brilliant! The awful thing was...nNOT being heard...as if what we were saying was not true! It does your mind in it really does. It makes you feel worthless, nothing, nobody. The HSE were perfectly happy to see us going around in crippling, crucifying dangerous wheelchairs. They didn't care. Now we have to say 'thank you' for our lovely new wheelchairs...ut the cost emotionally, psychologically was simply...too much. I don't say thanks for that.