identical twins remember how it is....

again my friends, i was trawling files to extract ten good images for an exhibition as i have been offered 'wall' to exhibit.

but in the course of my jumble which is supposed to be very un-jumbled files according to date/event/ etc et al, i found these images.

they remind me of many things.
but primarily they remind me that although these images were taken at the beginning of our decline we were proactive and loving life and feeling actually that nothing would get in the way, not even disability.

we remained smiling and strong in a sense.
we were determined, to carry on and to cope.


but then we didn't reckon on powerful forces which would bring us to our knees.
we met the hse.
after many rants, tears more rants and more complaints, begging and more tears we are still effectively embattled with the famous HSE.

it isn't our intention and nor was it ever our intention to land in this position.
that is, be sick or fight with anyone least of all a powerful body like the HSe.


i wish to remind the HSE there should be a LIFE going on despite the HSE, there should be a parallel where we can actually enjoy, contribute and have some peace and joy.
what has happened the latter has been swallowed by the former right now. 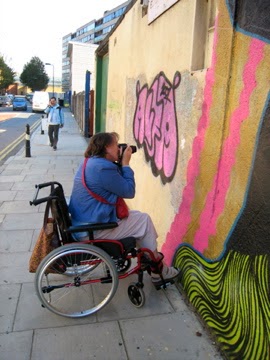 but ialso wish to tell all, its not my intention to stay in such a hopeless situation, but also i hope for justice after all that has happened.
to take life is a crime.
to take a living person and subject her/them to misery is also the taking of a life.
denying them a right to a life is a crime.
to deny my twin sister who has done so much is a crime.

we overcome so much including myself overcoming adversery but then to deny me my own personal life is also heinious after the flipping awful work i attempted to join the world after a prison of sorts in the mental health system.
ry severe deafness to become very ill and basically butchered down by the HSe.
i want to reassure you the phoenix will rise again.