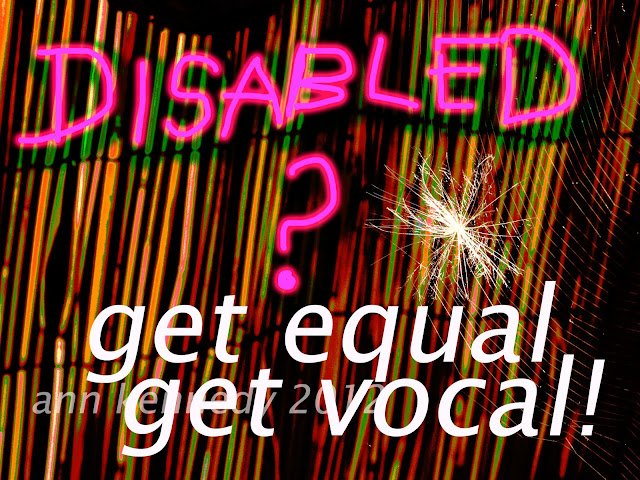 I awaken this morning with the same sickness within my soul.
I wake with bewilderment, thrying to make sense of the past ten years all the while knowing those ten years are gone and they are never going to be returned to me.
I wake also knowing that even before arriving here in Greystones, my awareness of progressive diseases meant that each new year would and did see me sicker than the year in passing.

But i have to look at this now in utter shock, suffering its effects to me and my twin sister and i actually cannot make sense of it at all.

When i came to Greystones, all knew within the HSE that i was escaping profound trauma already,  was escaping alcoholics, a bad housing placement, danger and anti-social behaviour.
What all, also knew was i had been in fact a very fragile and vulnerable person since the day i was born.
The fact that most of this history is on medical files and HSE files doesnt seem to have impacted on the personnel closely attached to the last area of residence as they come under the same managerial umbrella.

I left a county i never left in my entire life.  I left in trauma and against my wishes, i left when totally abandoned by the state both the healthcare services and the local authority housing services.
I effectively was abandoned at a time of great need by all.

The abandonment and extremes of abandonment are noted in Cllr. Pat Kavanagh’s missive to the Hse, that i had been very badly served and horrendously so in recent times by the HSE.

The effects on me is marked.
How can a state body, professing to care, be a health caring and safety upholding entity rubbish and vilify such a person as myself, with known brain damage, known vulnerability and sustain the attack for so long, unabetted irregardless of its reprecussions.
How can a state body for instance in this witch hunt, for that is what this was, manage to brandish me a person who is naieve, frail, elderly and sick as some kind of demon rather than turning around and having some sensitivity over the loss of my home, my home town and community and my brave efforts trying to start all over, when so ill with a neurodegenerative disease.
How can the state do this, knowing that what i was attempting was highly unexpected, unusual and i was doing so alone, alongside an equally sick twin sister.

What was the duty of care and when and how did it go out the window to be replaced with the strong arm of legalese to defend the indefensible.

How can a once fragile individual, shy, nervous but who loved people and tried to help all who were less able suddenly turn into some kind of horned devil?

How could the state perpetuate this myth and allow all its members to act upon this premise rather than reining in the groupthink and saying ‘stop’  which should have occurred a long time ago.

I had deserved as you had too to enjoy the time on earth that is so very precious, its never coming back once its over.
For the past ten years i have fought a mighty organisation, and the fight was unseemly, degrading and physically and psychologically damaging and injurous.

Did the state care that they were defaming a person of good character, trying to twist distress which i was in an obvious way very distressed into some kind of character defect?

Knowingly the state decided to abandon me.
They withheld care at every turn.  All care.
The HSE will fight this tooth and nail.  They claim that we have received the best of professional skilled care.

Can you cite where and when this occurred because i do not see it presently or in the past ten years.

Name calling and defamation is not a professional skilled approach to me or my care.
Bullying and harrassment prolonged and protracted is in fact against human rights and amounts to degrading and inhumane treatment and torture.

Bullying me to make changes to a property is inhumane treatment and against the law.
So too is bullying me into handing back a mobily scooter when no policy actually stated i ever had to, especially as i had maintained it out of my own money.

Bullying me and harrassing me to enter the mental health system against my will, is actually torture and against our fundamental rights, especially when all knew upholding the fact that i was of sound mind, didnt mean i had to be coerced at every turn to get back into the state system of mental health oversight.
This is bullyboy tactics and torture.

We had the withdrawal of services, and the denial of services.
We had the state take all my securities away which is both lack of forsight and also verging on an evilness second to none.
Because of the gross state interference i have lost so much.
Not only have i lost the quality of life i should have had once my twin returned from the UK, i lost her treasured company for happy times now.
What turned out to be a period of my life which i deem the most horrendous i have ever had to endure.
I saw the HSE as an agitator, an attacker on an individual which went uncensured from any source whatsoever.

Such attack was unwarranted.

The attack also emcapsulated punishment, for the punishment to me, for not capitulating to the heavy handed demands of a person i was never to meet who decided something about my property which i fought.
This actually was my right, but i have been severely punished.

I have yet to have any consisency of care if any care really.

I have been denied any type of meaningful physiotherapy, denied help in sorting a surface to sleep upon thus depriving me of sleep which is again a system they used in guantanemo.
I did no wrong!
In fact no one would have to have helped me to this level if they hadnt interferred in Dun laoghaire leaving me penniless.
That property that was small and inherited was to be my twin sister and my security against adversity, that has now gone, due to state interference.
What has happened now is that i am entirely reliant on the state whereas at one point i could have remained sufficient and self sufficent which meant i could be without such intense oversight by the Hse.

Virtually, my life would have been my own, not taken over lock stock and barrel by a seething HSE officialdom who now believe they have personal rights over my psyche, my life, my quality of life and are determined to twart my happiness at every turn. 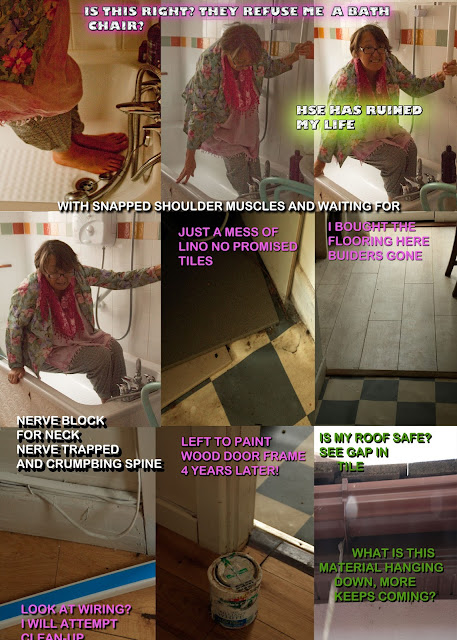 But leaving me alone in the first instance, would have meant that the hse would have saved themselves thousands upon thousands in monetary terms and would have left me, as an individual intact in self esteem, financially secure and able to manage for the future.

What happened now has been detrimental to both parties.
But one was longing for all this to end.
All i had wanted was care.
All i had receive was anihilation at every turn.

Leaving two sisters profoundly traumatised.
But does it leave the Hse in such a state.  No.

The state you see, upholds its own.
So they can attack during the day and turn into a sweet little family man or woman having barbeques in the garden with extended family or going sailing, swimming or lanquish on a beach without a care iin the world.
What you have left behind is two women in tatters, in shreds and then of course you get into your car and return to your office to resume pretty much, more of the same.
Attack unabated.

I am up to my ears still in copious files, all of which show page after page of unbelievable prejudices, dafamation, cruelity and data breaches and slander.
Its a pile of staggaring documentation of what a huge organisation is very capable of.

But remember come five o’clock you return to the normalised world of the average.
You return to your own family and would never dream of cooking up such shit to them, ever.
But its ok to do it with the backing of a full legal team and in some instances i believe you enjoyed it.
Watching margaret and i suffer must have felt like just rewards to some kind of vindication of your action.

To me its gross.
To me its humanity at its very worst, and also state sanctioned.
Although the HSE seems to be able to hide behind a shroud of legalise, they cannot hide behind the constitution, the fundamental rights which we have signed up to and the policies of the state directives to offer care and healthcare to its people.

One thing you will never be able to run from is from women who say it as it is.
What you have done to my twin sister and myself is an evil.
I do not mince my words.
What has happened here has been a grave injustice because margaret and i are peaceable people.  Kind people and many have said this and documented this. 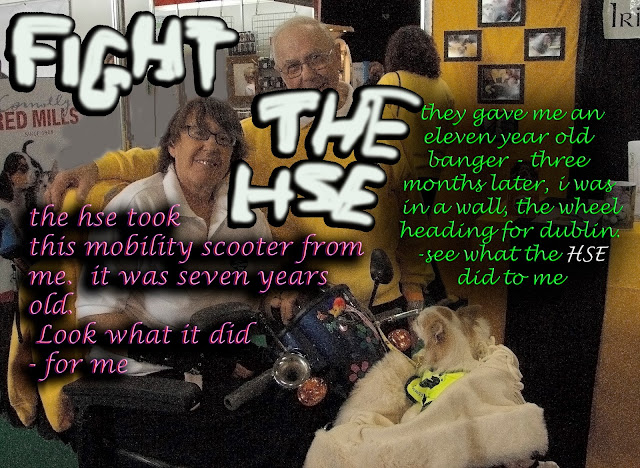 Some day the HSE has to say to itself.  We didnt behave well in all of this.
The day you manage to say this, then healing will occur.
Certianly waking this morning i woke knowing we are at midsummer, and in the very same position as we were in ten years ago.
In a personal hell and agony.
This can be rectified, but will you begin the process please.