yes, we can chuckle as the best of them.
but we are cunning, cute and crooked.
to the bone.

we write these wonderful reports all around the place, pat on backs of our colleagues, and all in for a bit of stroking each other as if this is some kind of sexual disease.

we do not want the truth out.
we also do not care much about others, not really.
again report after report says we are so jolly friendly, and we have the best environment to work in and we care, oh we care so much.

we care more than most.
we still have a morality in our humanity.

not a bit of it!
we lie, we cover up and we shore up the crooked the wealthy and damn the least fortunate.

the recent image of the red faced Reilly and the distorted smirking Enda just about says it.

we are winning the health battle says Reilly.
there, the disease again.  the chuttling cackling laugh.
it isn't funny.

pain and trauma is perverse.
pervasive and all inclusive, within the disability groups and within societies least able.

when we want to ask each other the 'whys' can we actually find the answers?

well, many have seen how it all works, but no one seems to be able to make the people who are paid to deliver, accountable.

Health.
we have two systems.
the HSE is there to deliver a service.
they are paid by the Department of Health to do this.
the Department of Health will tell you that they have nothing to do with health, when you ring and say the hSE is failing you.
but they PAY the HSE, surely to god then they have to make sure they are paying people who are doing their job well?
NO, actually, the HSE do not have to do their job well to get their pay salaries.
they just have to 'pretend' they are doing their jobs well, balance the books, in pretend fashion and cook all around.
the HSE only have to lie through the nose to cover their tracks of inefficiency and any query asked by the Department of Health, from a citizen of the state, well they lie about the query thus making the person asking the question of the government about the HSE out to be the liar not the HSE.

we know about this at this level.
the disability level.
we see it happening, we experience it, we read it in our files and yet - the Department of Health believes the HSE version and can then go into the media and say "the HSE is 'not fit for purpose!"

If it isnt fit for purpose i asked a 'civil servant' in Reilly's office today when is the HSE going to be disbanded.
she couldn't tell me.
but i say you are a right hand of the man himself and do all his bidding, why can you not say.
she didn't know.
why did she not know?
did she not know?
or is that another lie now one of many.
if you ask anyone in any department head office a question they must be told to tell the caller "say you are just a civil servant."
thats what they do.
'I am just a civil servant!'  Yes, but part of the governments office of Health!

We have sort of shorties from the minister's secretaries, be they the Minister for health or the minister with special responsibility for disability.
eg:

'the minister's office is looking into this.'

If you believe that you are more fool than i thought.

we also have a ministers private secretary say:

'your situation is being addressed.'

which also could mean absolutely anything at all, even nothing at all.

certainly the situation i talk of speak of is the only situation i have been speaking and talking of for over two years and they still are not being addressed.

lets answer now the series of innuendos that is put into the public domain about an individual.
if an individual asks a questions many times, they are labelled.

and the label is libelous, but you can say that, and you cannot even prove it, but it is.
why, because these sort or snorts are sent to all the departments of the HSE within your own personal medical files so that all departments are to be aware that your question is a complaint when it isn't, its a question.

what is the HSE doing about my wheelchair situation?
this isn't a complaint, its a question.

when you are labelled a person with a behaviour disorder of complaining, i kid you not, there is an equal one for liars.  its called pathological liars and psychotic thinkers with no concience for the truth at all.
thats actually is a medical condition.
it is known that poor sods with psychosis and sociopaths tend not to be that truthful and have a propensity to lie and not know the difference between truth and fiction and other.
its called blurring the boundaries of reality.
The HSE and the Department of Health, Reilly's office, that is, has this in spades.

how do you know?
well you would if you were at the bottom of the rung as in being disabled.
it hits you in the face daily.
and leaves you floored.

we have a European Union, well there are a lot of europeans there, and we little nation is amongst that lot.
yet us, that is Ireland is about the only one who has not ratified the EU convention on the rights of people with disabilities.
nope they have not.
in not doing so they are breaking an ethics code of bond which they agreed when they decided to join the European Union but then Ireland is Ireland.
if joining is advantageous they will screw it, but if it not then they will ignore such facts as human rights.

for its own citizens.
but then we as the citizens,  we are not to be trusted, we lie through the nose, and tell porkies so we do, eg 'my wheelchair went into a wall and lost a wheel that travelled half way to dublin'
it isnt a nice porkie when it happens.
i was sitting facing real granite.

A woman whose wheelchair went into a wall after one of its wheels fell off on her way to hospital has launched a fundraising campaign, with her twin sister, in a bid to buy two new electric wheelchairs.
Ann Kennedy, a former artist, and Dr Margaret Kennedy, who campaigns for victims of clerical and institutional abuse, have a neuromuscular degenerative condition and depend on wheelchairs to get around.
The sisters, who are 60 and live in Greystones, Co Wicklow, were given temporary, reconditioned electric wheelchairs by the HSE in spring and told they would receive new wheelchairs once the funds were available.
The sisters claim their wheelchairs are inadequate for their needs and that Ann’s wheelchair is “not fit for purpose”.
Ann said she was on her way to St Vincent’s Hospital for a neurologist’s appointment on July 29th when the left back wheel fell off her wheelchair.
“I shot right into a wall,” said Ann. “It was very distressing. I had to shout at two people in front of me to get their attention and they picked up the wheel and waved down a taxi for me,” said Ann, who also has Crohn’s disease, primary Sjögren’s syndrome and Raynaud’s syndrome.
“I desperately need a new wheelchair. I’m using it everyday at the moment. I don’t think it’s safe. It’s hardly going up a very slight slope,” said Ann who had the wheelchair repaired.
A statement from the HSE said that it did not comment on individual cases.
“All applications for aids and appliances are based on a assessment of need and prioritised within allocated budget,” the statement said.
“All appliances are assessed by an engineer to ensure they are fit for purpose, repaired if necessary, cleaned, decontaminated and made available for reuse.”

The Wheels Appeal: Ann Kennedy or Margaret Kennedy: Ulster Bank, Bray, Co Wicklow. Account number: 11281838 and sort code: 98 53 75
my situation is about the wheelchair, among a few other things and the minister says its being addressed.
well, i wonder when.
by whom
and all sorts of questions arise, but be very very careful because you could be labelled pathological remember your own words, this is a question not a complaint.
which it is, when?

'when' is a question.

This blog is a complaint, about how the HSE and the Department of Health couldn't tell the truth and are people who blur the boundaries of reality and never deal with much at all.
'pathological liars' i call them.

that isn't a question nor a complaint, its the blatant truth.

how do i know this you may ask again.
because i experience it.
every day and its not going away at all.

that is one truth for sure.
the next being, it is recognised that the HSe isn't fit for purpose and that the outgoing ombudsman's real regret being, 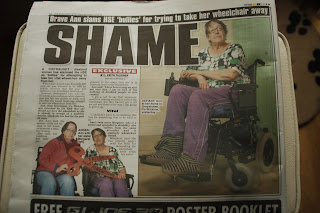 she never managed to have an adult engagement with the HSE.
we know certain truths.
we also know certain lies.

when will the HSE be abandoned?
well no one knows.
or do they?

My biggest question today is 'when will either the HSE or the Department of Health learn to tell the truth in anything, so that the citizens of this state will actually know what is the difference between their lies and their truths, we do have a blurring and we need to know.

finally, when will the government of the day ratify the European convention on the rights of people with disabilities?
Posted by Awnyah at 9:51 AM